Karuna Therapeutics won the 2021 STARR Sponsor of the Year Award. 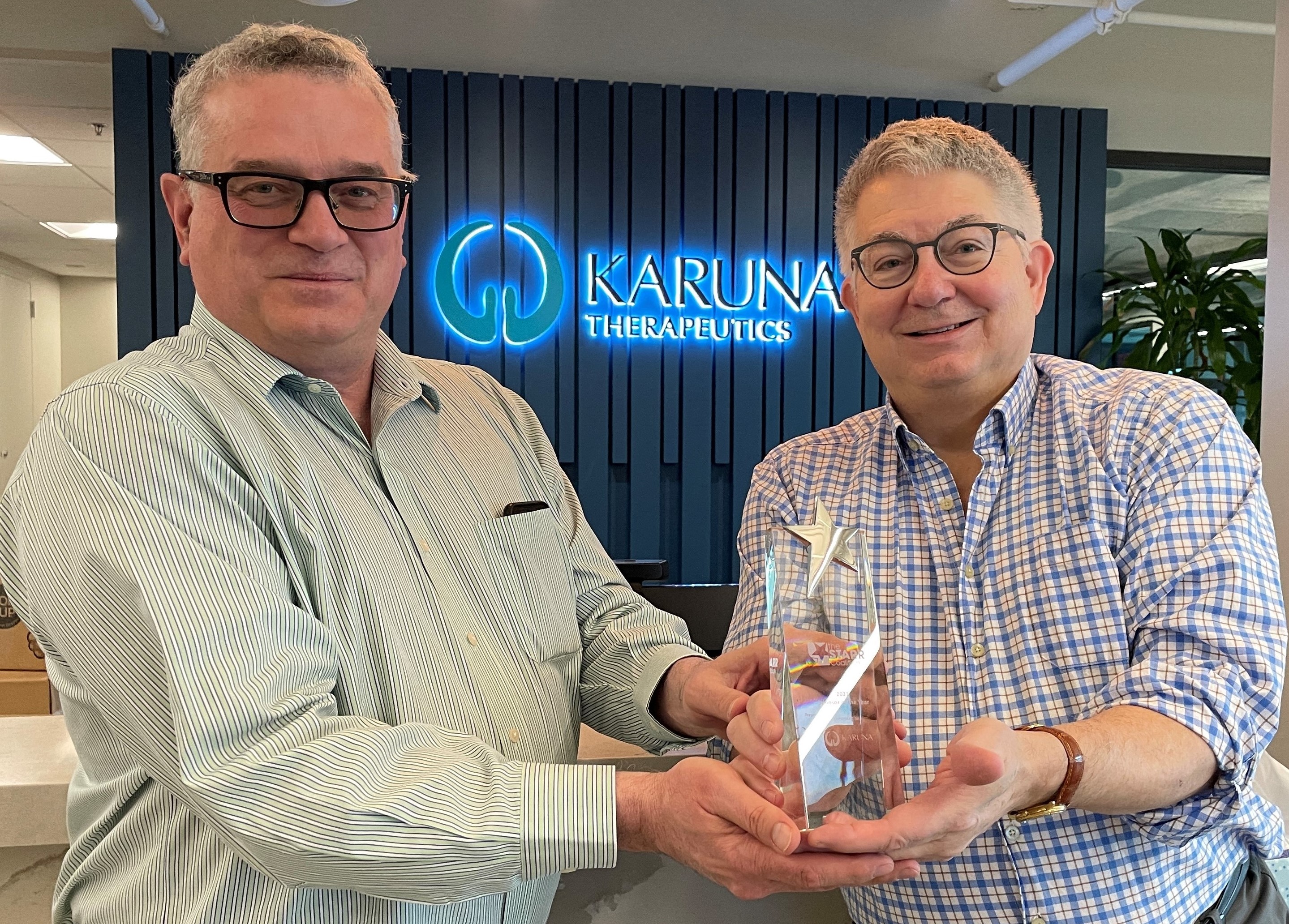 Karuna Therapeutics, a clinical-stage biopharmaceutical company driven to create and deliver transformative medicines for people living with psychiatric and neurological conditions, is led by a team uniquely steeped in neuroscience and motivated to responsibly study and deliver medicines that may offer substantial improvements to those living with schizophrenia and other neuropsychiatric conditions. Karuna’s leaders understand that current treatments do not sufficiently relieve the burden that people with psychiatric and neurological conditions experience day-to-day, and have made it their mission to develop medicines that can make a meaningful difference in their lives.

Given Karuna’s contributions to mental health research and the fact that a company as young and relatively small as Karuna would put patient advocacy in the forefront of their mission to create new therapies for mental health treatments should come as no surprise to anyone familiar with the leadership team. They have deep expertise in bringing new therapies to people living with mental illness, as well as acute understanding that they have a responsibility as researchers to engage with patients and advocates on how those medicines should be developed.

Syneos Health won the 2021 STARR CRO of the Year Award.

This award is given to the CRO deserving of recognition for their efforts in working with advocacy on behalf of those living with mental health illnesses, as well as their exceptional support of the STARR Coalition and our collective efforts to support mental health clinical research.  Syneos Health, which has won this Award for 4 consecutive years, has been engaged even more heavily this year in mental health advocacy and in diversity efforts. When Syneos Health promotes attention towards topics of diversity in leadership and diversity in clinical trials, we are including mental health in that messaging.  Syneos Health’s diversity advocacy work is co-led and supported by many members of the STARR Community, particularly Dr. Shishuka Malhotra, and we are honored to be part of this unique community.

CenExel ACMR won the 2021 STARR Site of the Year Award. 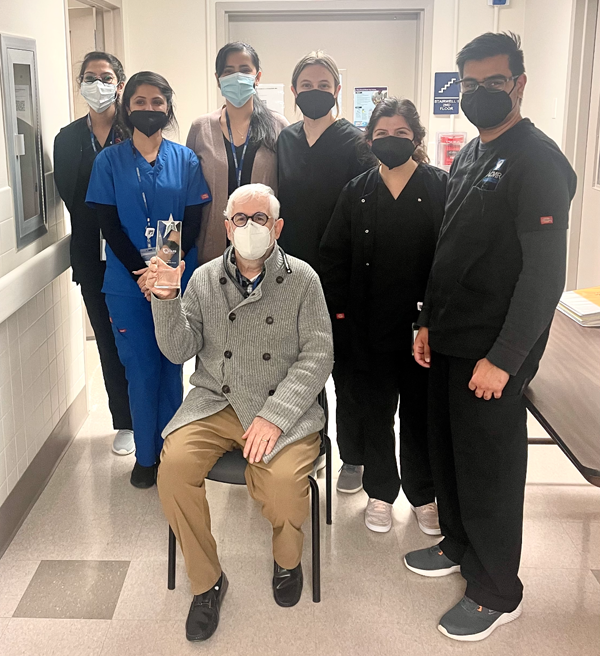 CenExel ACMR, a fully dedicated, 100,000 square foot, state-of-the-art research facility in Atlanta, GA, was honored for their work in mental health awareness, advocacy, and education, both in Atlanta and across the U.S., as well as their contribution to pivotal research around the impact of COVID-19 on the mentally ill, and their community work to locally address generational mental health in families. CenExel ACMR has distinguished itself throughout the year for its commitment and dedication to advancing not only mental health research, but also patient care by treating every patient volunteer with respect and integrity, ensuring that research is seen as a part of the community’s healthcare ecosystem.

This past year and a half, ACMR has made a conscious effort to reach out to the local communities to spread awareness of clinical research as care option. They have done holiday drives for toys and families; have made care packages and distributed them to local nonprofit organizations, and have gone out to local organizations and handed out flyers and offered trainings and Q&A sessions.

Accepting the award on behalf of CenExel-ACMR was Dr. Sarah Kazmi, VP and General Manager. Dr. Kazmi and the CenExel ACMR team has been involved with the STARR Community for several years, including co-hosting several of the monthly STARR Site-to-Site zoom calls, collaborating and sharing their expertise with the STARR Community.

The Jed Foundation won the 2021 STARR Advocate of the Year Award. 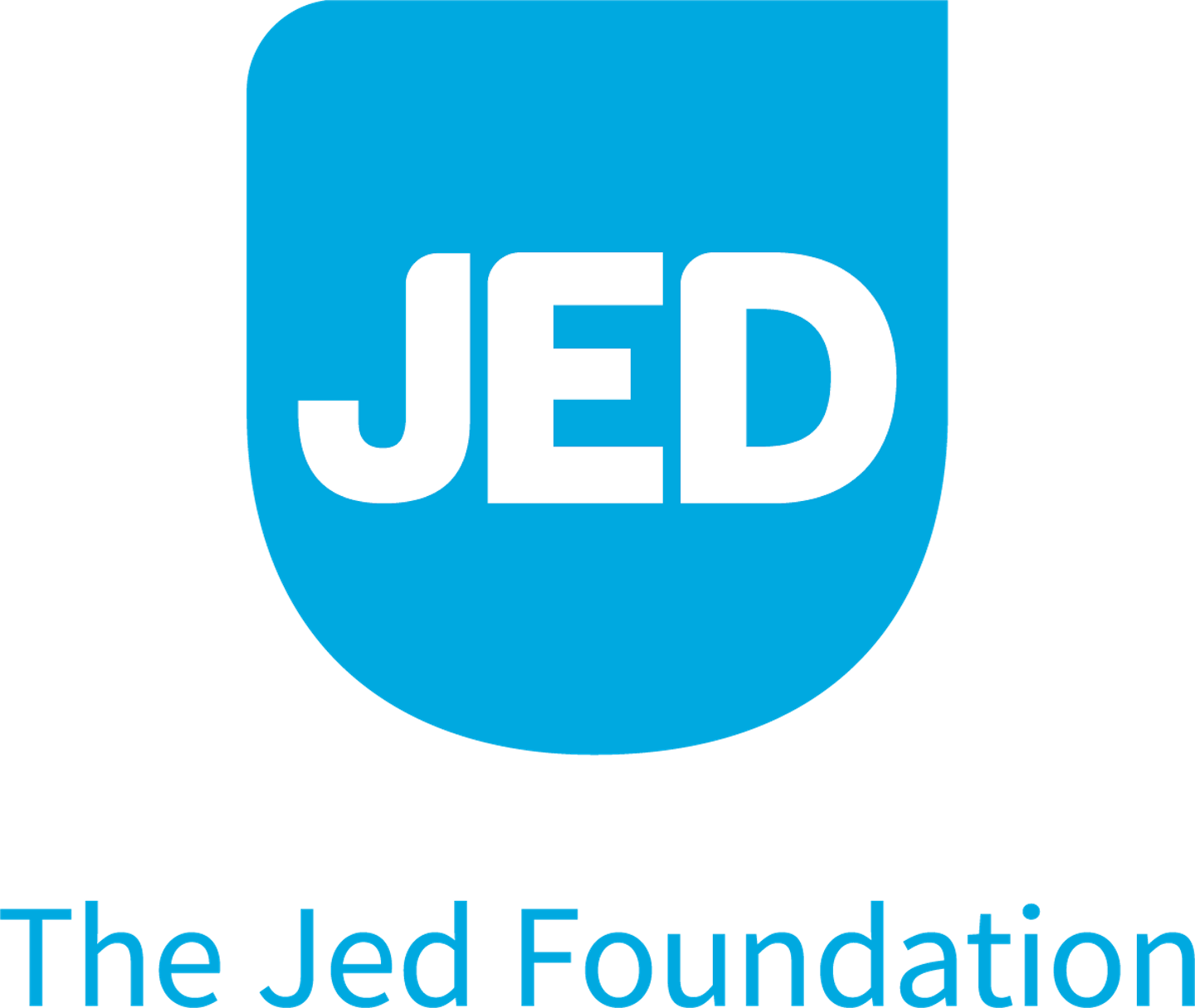 The Jed Foundation is a nonprofit whose mission is to protect the emotional health and prevent suicide for our nation’s teens and young adults.  The Jed Foundation is committed to mental health research to support the development of new interventions, recommendations, and resources for those coping with mental health challenges and illnesses.  Two key areas of research for JED over the past year were focused on student parents and LGBTQ+ youth.  For the first, JED partnered with Ascend at The Aspen Institute to conduct research on the topic of student parents and develop a set of recommendations to help colleges and universities better support these students. For the second, with support from the Upswing Fund, JED partnered with the Consortium for Higher Education LGBT Resource Professionals and several subject matter experts to conduct research and develop a report and framework to guide high schools, colleges, and universities in developing, implementing, and refining programs to support the emotional well-being and mental health of LGBTQ+ students. JED is committed to using research to help create essential communities of care so all students feel a sense of belonging at their schools. 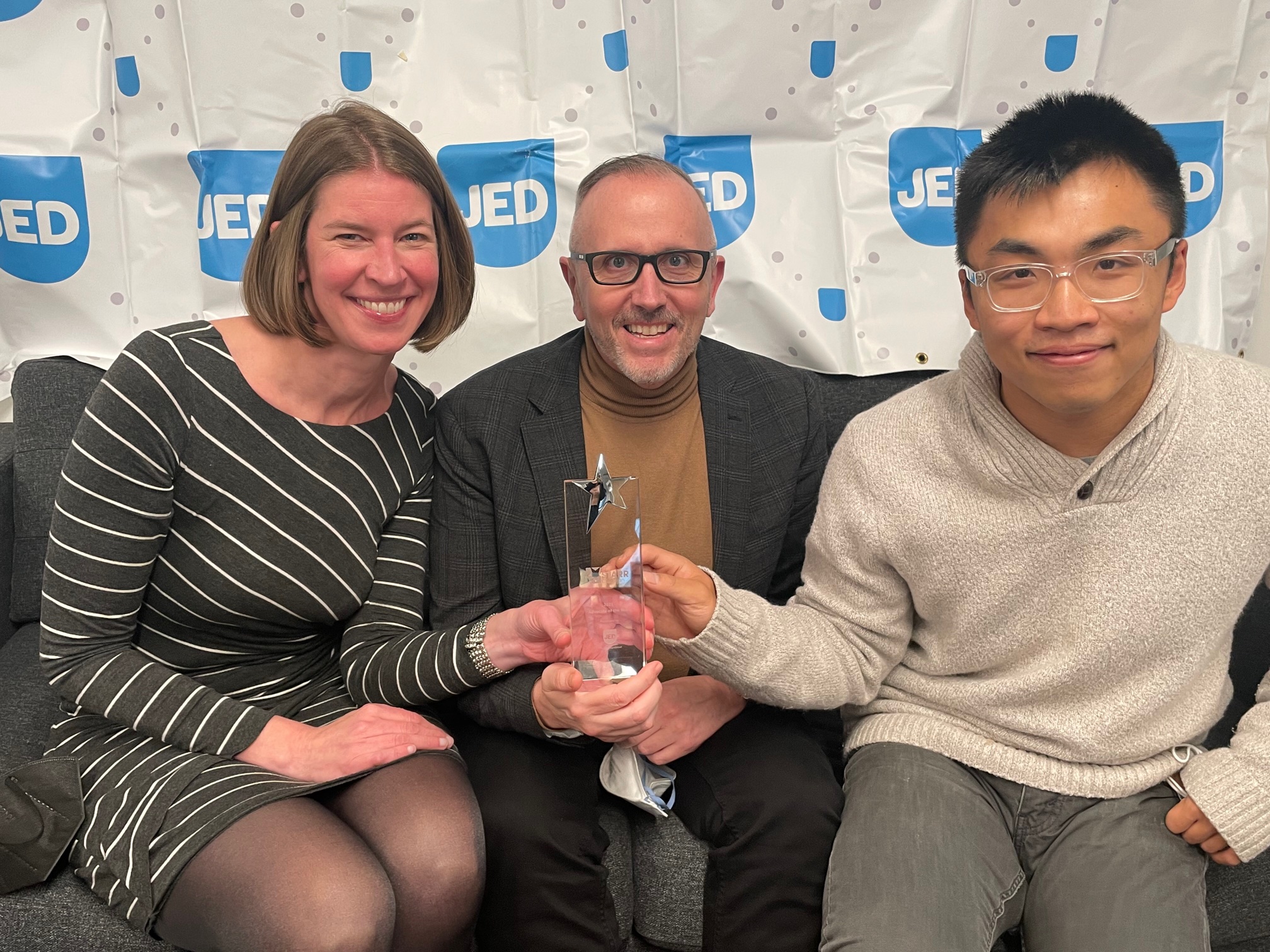 Having joined the STARR Community in 2021, The Jed Foundation has fully immersed themselves into the community, always engaged, collaborative, and willing to give feedback and ideas on the STARR Advocacy Board calls.  The Jed Foundation has grown both their JED High School and JED Campus programs to serve nearly 400 schools representing over 4.8 million students. Reaching this incredible number of school-aged children allows them to support so many students’ mental wellness, as well as greatly reduce the risk of suicide. Video stories for JED’s Seize the Awkward campaign, which was developed in partnership with the American Foundation for Suicide Prevention, has been viewed over 50 million times. And research shows that teens and young adults who have interacted with this campaign are more likely to have initiated conversations with their friends about mental health. We all know that it starts with one conversation that can change someone’s life.

Kimberly King of DBSA, which was the 2020 STARR Advocate of the Year, presented the award, along with Mallory Mercer, the Director of Advocacy Engagement for The STARR Coalition. Accepting the award on behalf of The Jed Foundation was Katie Cunningham, Chief External Affairs Officer. 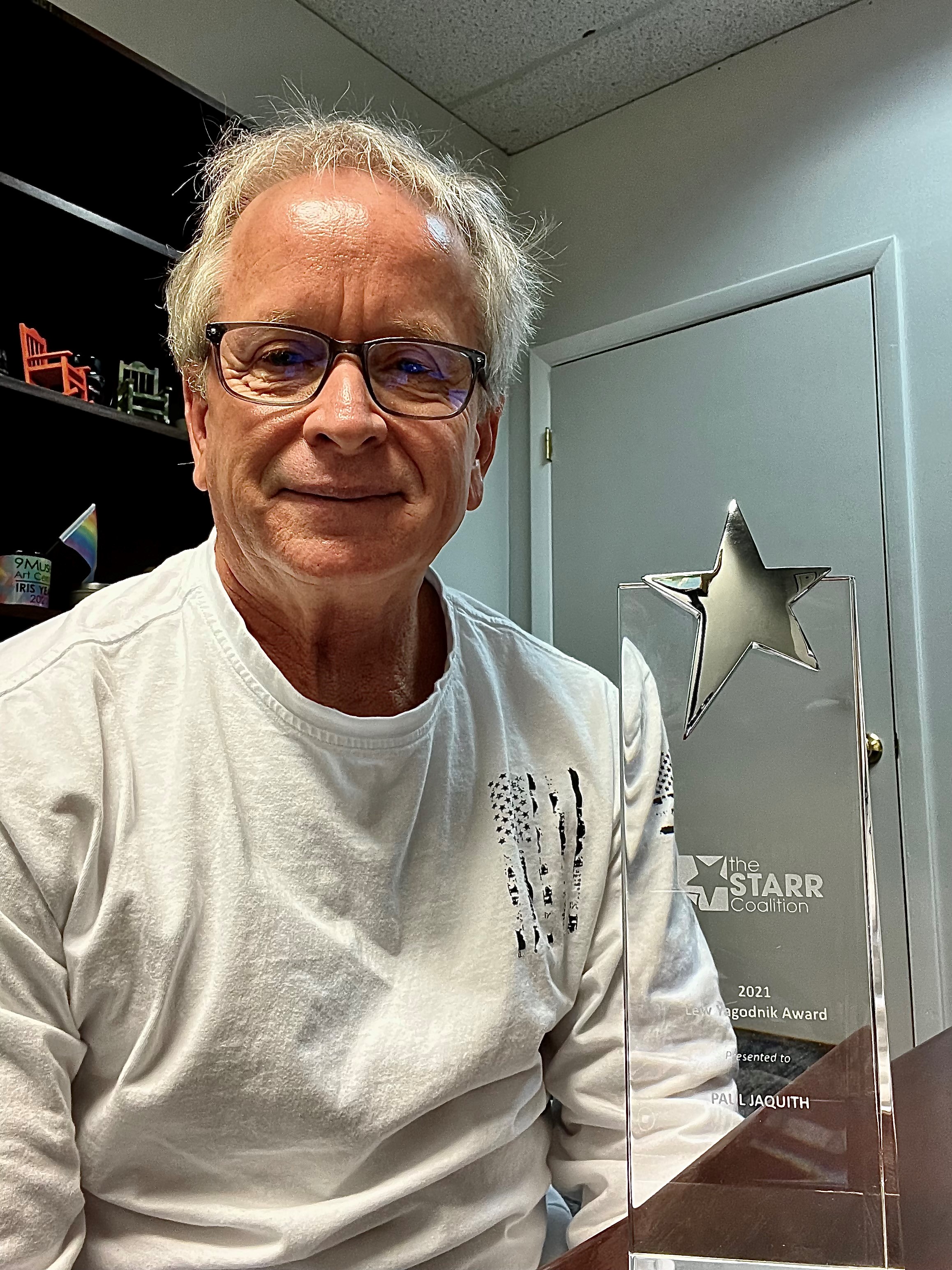 The ‘Lewie’ is the only STARR award given to an individual that has made a significant impact in support of new treatments for those living with mental health illnesses. Paul was selected as this year’s Lewie Awardee because for the first time ever, Paul presented at the National Mental Health America Conference in support of mental health research.  Paul appealed directly to MHA’s affiliates from all over the country about the need to for providers of services to utilize every option in our tool belts to help people find recovery and comfort.   MHA and the affiliates have traditionally seen research as a non-treatment focused process, but Paul’s appeal changed that.   The new CEO of Mental Health America National was in the audience and agreed that National MHA would embrace the idea that research is a valuable link in the chain to recovery.

Paul exemplifies how one individual can change the conversation around mental health research in a major, major way, paving the way for thousands of people including advocates, peers, peer support staff, and MHA affiliates across the country to accept research not as just a treatment option, but as a path toward hope for a cure.
The Award was presented to Paul by Matthew Shapiro, Associate Director of Public Affairs for NAMI New York State and last year’s winner of the Lew Yagodnik Award.

On behalf of the entire STARR Community, we congratulate this year’s STARR Award Winners!